Success story: Robert and Amy share their tale of romance!

DateBritishGuys are excited to share yet another story of love and marriage from an Anglo-American couple who met on our site. Robert from Britain wrote to DateBritishGuys to tell us about his romance with Amy, who lives in Texas!

Robert: “Thank you so much for helping me to find the most beautiful girl in the world. It was through your website that I met Amy.”

Robert started to email Amy in the summer of 2015, and since the first email they were in constant contact with each other. They both spent many hours’ texting and Skyping each other, and the relationship quickly blossomed. Robert said that hardly a day went by without them speaking to each other!

As the relationship became more serious, Amy decided to fly to Britain so that she could spend Christmas and New Year with Robert. The pair had a wonderful and romantic trip, spending New Year’s Eve watching the beautiful London fireworks from Westminster Bridge.

So what happened when Amy went back to America? The pair didn’t want to be separated for long, so Robert bought plane tickets and came to Texas to spend three weeks with Amy. During this time Robert met Amy’s close friends and family. They even got to spend time with Robert’s old friend, a man from Britain who also fell in love with a woman from America!

Now Robert is back in Britain, but his romance with Amy only grows stronger. Amy is coming back to Britain this July, and in Roberts words; ‘it can’t come soon enough’!

Robert has also applied for an immigration visa, and once he has been accepted he plans on moving to Texas so that he and Amy can get married!

“I never truly believed that I would find the perfect girl, but I am extremely happy to be proven wrong. Once again, Thank you Datebritishguys for introducing me to the most amazing girl!” Robert 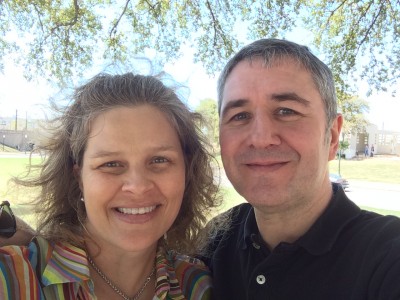 Their story is similar to the story of Ben and Becca, the founders of DateBritishGuys.com. The website is inspired by their own romance (Connecticut-born Becca met Ben while studying abroad in London and the rest, as they say, is history). DateBritishGuys.com now has more than 20,000 members who are adding an international flair to their love life.

Love our success stories? Read more testimonials from couples who met on DateBritishGuys.com here! Want to share your own story about someone you met on our site? Send a brief description and photos to info@datebritishguys.com. We look forward to hearing from you!