The team at Date British Guys are excited to share yet another story of love and happiness. The Anglo-American couple met on our site last year, and the pair are now happily married.

The story started when Megan, who lives in California, saw DateBritishGuys on television. Megan said: “I am of Scottish-American descent and when I saw your site mentioned on the BBC, I couldn’t believe my luck. I signed up right away – and 18 hours later, the love of my life messaged me.”

She had received a message from David, who is from Ayrshire in Scotland. The pair started messaging each other regularly, and they quickly started to fall for each other.

What do you both love about each other?

Megan: “I love how patient, intelligent and kind David is – and he is totally fit! To me, David is the embodiment of unconditional love.”

David: “I love how intelligent Megan is and how well she compliments my temperament. I have a tendency to be more subtle, whereas she’ll call a spade a spade.”

Megan: “David loves answers and I love questions. David got his degree in Computational Physics. I got mine in Theology. I love having my head up in the clouds. David can tell you what kind of clouds they are and what weather system brought them in. We complement each other perfectly. Ironically, he could pass an American Civics test better than I could. On the other hand, I speak more Gaelic than he does and whip him in Scottish culture!” 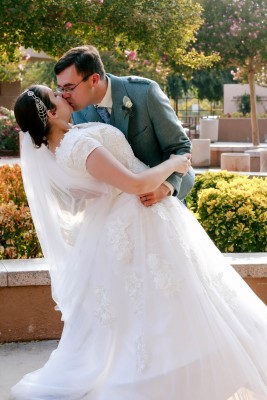 Megan and David had started to fall for each other, so they decided to meet in person for the first time – and the rest, as they say, is history. They fell completely in love with each other, and they married in September, on the one year anniversary that they had “met” each other on Date British Guys.

The happy couple now live together in California, and they have big plans for the future. David is currently a flight instructor, and he is planning to start flying as a co-captain for an airline soon. Megan runs her own small business that specializes in custom made prom and wedding dresses – she even designed her own stunning wedding dress! They plan on living in California for the next five to ten years, and then they will return to David’s home country Scotland. 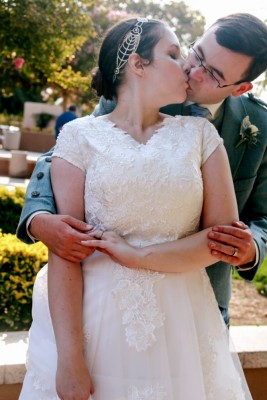