Scott And Mary Get Married

DateBritishGuys are excited to share yet another story of love and marriage from an Anglo-American couple who met on our site. Mary, who lives in North Carolina, wrote to DateBritishGuys to tell us about her romance with Scott, who lived on the island of Jersey!

The pair first started messaging each other during July 2015. They got on well, and they quickly moved to emailing, texting and voice messages. Eventually the pair were Skyping regularly, and they decided it was time to meet in person. They decided to meet in Florida, as Scott was travelling there to play in a softball tournament and Mary had arranged to see clients there.

What was it like when you saw each other for the first time?

Mary said; “It worked out perfectly. He got to Florida before I did and started playing in the tournament. When I flew in, I rented a car and headed straight for him. After driving around the softball park, I finally found him. I said “Are you going with me?” And he said “Okay”. We’ve been mad about each other since!” 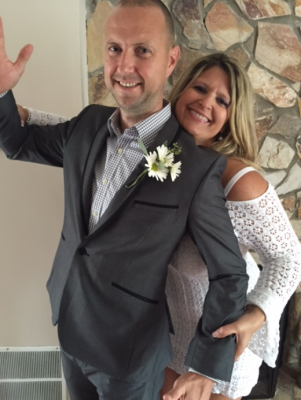 What did you first bond over?

Mary: “For me it was his morals and values, love for life and sincerity in helping others.”

Scott: “Very similar. How incredibly kind, humble and selfless Mary is. I suppose it was those qualities in each other, that we had each struggled to find before, that drew us together.”

Scott had to head home after a wonderful five days, but the pair were officially smitten, and they began Skyping every day. After a few months, Scott came back to North Carolina for a week in December, when he officially proposed to Mary. Of course, she said yes! He then came back for seven weeks in January, and in April Mary visited Scott at his home in Jersey.

What do you love about each other?

Mary: “I love everything about him ….. His flaws included….. Because they make him the one for me just as much if not more than his big heart, his boyish charm, that to die for accent, sea blue eyes and the great body!”

Scott: “I love how kind and humble she is, at the same time as being determined, but beautiful and vulnerable at the same time. She really is an open book. And I love the fact that we’re so different – she loves getting up early in that typically American way, which I don’t, and she’s a planner, which I’m not, we don’t get each other’s cultural references, which leads her to look blankly at many of my brilliant jokes and film quotes, but we complement each other perfectly. Ultimately, I married the tall, blonde, curvy, Southern, American beauty that I’d always dreamed of. Lucky me!”

Scott and Mary were engaged and in love, so Scott decided to move to North Carolina to live with Mary. He moved to America on July 22nd – and by the end of August the pair were married! 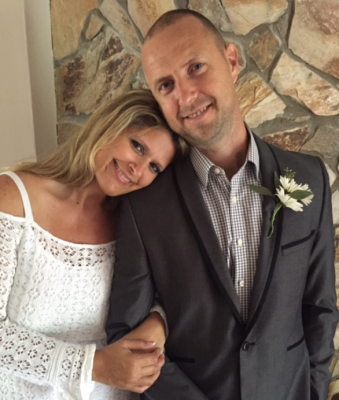 Mary: “We started our family shortly after getting married on August 5th. We took in a kitty that had been abandoned. We call him Jersey because Scott has always had cats on the island and we thought having a kitty would keep him close to home as he took this giant leap of faith in his move to the US!”

“We plan to live life to the fullest every day and love, accept and appreciate each other! We are waiting for his green card now. It’s in process. Once he has that he will open his personal training business here.”