Roland And Lauren Get Married!

Roland and Lauren both joined Date British Guys in 2018 hoping to find love – and within a few weeks of signing up they matched with each other. The pair quickly realised that they really liked each other, and within a month they met for the first time.

Now, nearly two years later the pair are happily married… so we thought we would talk to them about their romance!

When did you first start messaging each other?

Lauren: We first started talking in February 2018, and we got on really well. In fact, we met exactly one month to the day of us talking! I flew from Los Angeles to London for a trip that was already planned and we made a date in Warwick.

What do you love about each other?

Lauren: I love that he’s kind and genuine. He’s loyal and his sense of humor fits with my personality.

Roland: There is a lot that I could say here. From her smile, energy that she has for her work to her ability to make me want to be the best person I can be because I haven’t opened up as much to one person in my life like this before. It didn’t take much for me to know that she was the one for me! 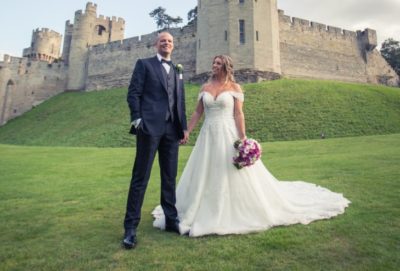 Roland: To get ourselves settled over in the USA once the visa is sorted, finding work and so forth and getting ourselves a routine (rather than the difficult back and forth between countries that we currently experience!).

Lauren: Now that we are married we plan on settling into our home in Los Angeles, California.

Do you have any advice for singles on DBG?

Lauren: Think outside the box. Don’t have too many expectations and don’t set up too many parameters. If I had ruled out men with cats, I never would have met Roland! Be willing to meet the person (within a reasonable amount of time of talking) or chances are nothing will flourish. Keep an open mind.

Roland: Be yourself and don’t give up looking for that person who when you meet it just clicks. I was never one to believe that “when you know, you know” line but I can’t say more than that because, for me, it’s true.