Megan And Nigel Are Having A Baby!

Megan and Nigel first started talking to each other on Date British Guys in 2015, and now the pair are married and expecting a baby together! We decided to speak to the pair to find out more about their DBG love story.

Megan is an American woman who is originally from Pittsburgh, while Nigel is a British gent who lived in Bristol, UK. Before they started talking Megan was very hesitant to try online dating, and she wasn’t sure if DBG was the right website for her.

She told us; “It sounded kind of cheesy to me, but I knew that I wanted to find a British guy so I decided to take a chance.  There were a few duds that didn’t really turn into much chatting for both of us, so I remember telling myself that this was the last day I was going to be on the website… And then I got a new message from Nigel.”

One of Megan’s pictures showed her sitting in a UH-60 Blackhawk helicopter, and Nigel messaged her to ask “is that a Blackhawk you’re in?” As Megan works in aviation she was very happy to find a British man who shared the same interests – and when they started talking Nigel told her that he also flies in the British Army.

It all seemed a little too perfect; a handsome British man who worked in the same industry! And so Megan decided to stay on Date British Guys for a few more days, and during that time the pair began to fall for each other.

After a week or so the pair decided to start Skyping, although Megan was very nervous about the idea. Thankfully the first chat was a huge success, and the pair ended up staying online for over three hours so that they could keep talking to each other.

Soon the love-struck pair were talking for hours every day, so they decided it was time to meet in person.

Megan told us; “Nigel and I first met in Dallas right before I was deployed.  He managed to get a four day weekend free, so he spontaneously bought a ticket to come see me. I was terrified that the chemistry we had over Skype wouldn’t translate in real life, but thankfully I was wrong.  We really hit it off.”

The pair continued to talk while Megan was deployed, providing each other with a source of support and comfort while they couldn’t be together. During this time Nigel was going through a difficult custody battle with his previous partner, and working through the challenges together really brought Megan and Nigel together.

Now the pair have an inseparable bond, and soon they decided that marriage was the next step. After all, they were already starting to build a house in Pittsburgh where they could live together! So Nigel made the decision to sell his house in the UK, and he started to stay with Megan whenever he wasn’t deployed. 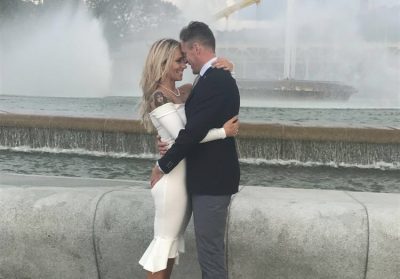 Now the pair are truly smitten. Megan said; “I really adore Nigel’s work ethic and drive to be successful in every aspect of his life.  He’s a wonderful father and works hard to help provide for us and his children.  We both love to travel!  I think Nigel loves my determination and drive to excel.  He’s really taken to my desire to be a good role model and stay actively engaged with his two children.”

“One thing that makes us very compatible is both of our desire to achieve our goals.  We both have demanding, rewarding careers in aviation, and we love traveling together. Nigel is currently waiting to receive his Visa, and we recently found out we are expecting our first child together.  I’m so glad I took a chance on your website, it led me to finding happiness and fulfilment with my partner that I never thought I could find!”

“We couldn’t be more excited to be having a child of our own this June!  I can’t wait for all of the new adventures life brings us!  I’m forever in debt to your website for helping me find the person I believe I was truly meant to spend the rest of my life with.”

The whole team at Date British Guys are so happy to hear that Megan and Nigel found love on our website. We wish their little family all the best for the future!