Gareth And Elisabeth Get Married!

Gareth and Elisabeth met on DateBritishGuys in 2012, and the pair are now happily married with a beautiful daughter.

Gareth has lived in Telford, Britain for most of his life, but when he joined DateBritishGuys he was residing in Germany. Elisabeth was living in America at the time, and she decided to join DateBritishGuys after meeting the site owners Ben and Becca on her vacation.

The pair first started talking in July 2012, and after months of messaging they decided to meet in person.

Elisabeth: “I remember the moment like it was yesterday. It sounds cheesy, but it was the exact moment I knew I loved him wholeheartedly. He tells people that it was then that he knew he wanted to spend his whole life with me. It was crazy!

I was waiting for him outside airport customs for almost three hours. I finally heard this voice from behind me who asked if I was waiting for someone and realized it was him, and I don’t know what came over me. I turned around and jumped into a hug and went straight in for a kiss! There is no other way to explain it, except that it just felt right.” 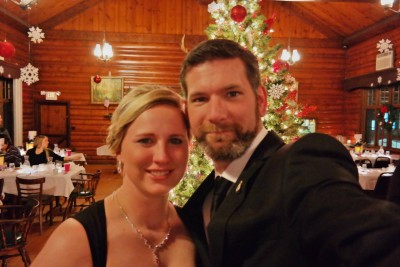 Gareth stayed with Elisabeth for 2 weeks and during this time they fell deeply in love. A few months later Elisabeth visited Gareth in Germany, and then he visited her again in November for a long 8 month stretch.

How did you make it work for 8 months when you both had jobs?

Elisabeth: “We started in the States for 3 months and then we both travelled to Germany, the UK, and Cyprus to visit his family. When we got back to the States, Gareth stayed for another 3 months before going back to the UK to work. The day before he left in June 2014, he sat them down and proposed to me.”

The wedding was held in August 2015, and it was held in a beautiful park next to a fountain. Elisabeth and Gareth’s close friends and family attended, and it was a perfect day.

A few months later Elisabeth found out that she was pregnant, and Gareth decided to stop travelling for work so that he could move to the States permanently. 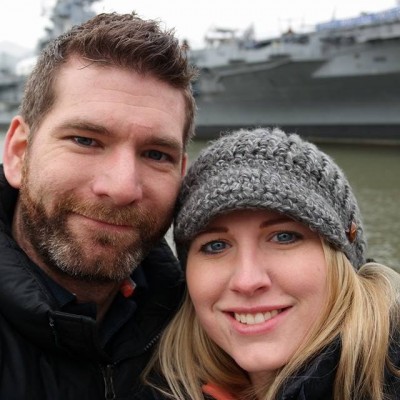 Elisabeth: “The process was mostly a lot of paperwork and a final interview. Gareth was unable to work during the processing time so I worked all the way up to delivery. Two weeks before our daughter was due, we had our final interview and he was approved for his Green card! He got everything he needed the week before she was due, the stress of that was probably what made my blood pressure go up and they decided to induce me. On June 9th 2016 we had a beautiful and healthy baby girl and we called Charlotte.”

Six months have passed since Charlotte’s birth, and now Gareth and Elisabeth are living in Chicago with their daughter. They are very happy together, and they are looking forward to their future together as a family.